A Dead Bod: Songs of the Humber Waterways 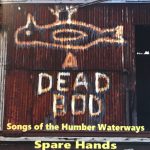 The Ballad of Dead Bod

Bury Me Down at Cape Kanin

The Collier Brig/Old Joe, the Boat’s Going Over

Final Whistle (or Rise and Shine)

The Devil and the Tugman

The Battle of Sykehouse Lock

Gezz Overington
Three of the songs on this album were written by Gerald (Gezz) Overington in the 70s. Gezz’s father Willy was engineer on the Tom Pudding tugs and his brother-in-law, Goff Sherburn who features in most of the songs, was skipper of the Tom Pudding tug Kellingley. Goff and Gezz are no longer with us but the tug Wheldale was lovingly restored by Goff and his brother Ernie and is still taken around Goole docks by a very able crew of volunteers. The Tom Pudding tugs towed long trains of compartment boats (pans) full of coal from the West Yorkshire pits to Goole Docks. Having continued this trade for over a century the job was finished in 1986 when the pits were closed down. All of Gezz’s Aire and Calder Navigation songs are available on an album and booklet from the Yorkshire Waterways Museum at Goole.